HOW QUICKLY SHOULD YOU PAY YOUR STUDENT DEBT | STUDENT LOAN FORGIVENESS 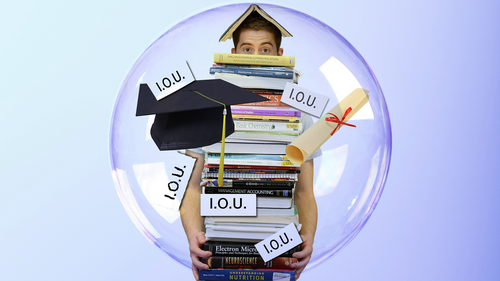 Paying Off Your Student Debt: Doing the Minimum or Going for Extra Credit?

Millions of people have student loan debt on their hands, averaging at around $33,000. It's no wonder that so many are wondering if they should pay off their loans quickly, or take it slow to build their credit score. It can be a major problem for Americans in their twenties and early thirties who find themselves unable to afford the minimum payment on their student debt, and end up paying hundreds of dollars a month extra to get rid of their loans more quickly isn’t plausible. On the other hand, those who do pay these loans off in less time end up saving thousands of dollars in interest over the life of the loan.

How Much You Should Pay On Your Student Debt

You've probably heard that to avoid onerous interest charges, you should pay off your credit card balance every month. Even though paying off tens of thousands of dollars of student loan debt in one fell swoop isn't possible for most people, many can pay a little more than the minimum payment every month.

What If You Can Only Afford to Pay the Minimum?

For many people who are fresh out of college (and even those who have a few years in the job market under their belt), the minimum payment on their student loans is all that they can afford.

People in this situation should do everything they can to at least make all of their payments on time. Late payments can result in you paying more interest and additional fees. A string of missed payments could lead to loan default, which could mean wage and tax refund garnishments.

If you can’t make your student loan payment on time, immediately speak to your student loan servicer. They can often give you options like a temporary suspension of your payments due to financial hardship, or they may even be able to change the terms of the loan to make it easier to pay off. You may even qualify for student loan forgiveness in certain cases.

You should be aware that all these factors play into your overall credit score and your future borrowing ability.

How to Pay Off Your Student Loans Early

As a rule of thumb, you should put as much money towards your student loan payments as possible. Doing so could have you paying a lot less money in interest payments. One popular debt repayment method that many people have used for their student debt is the snowball method, popularized by Dave Ramsey. With the snowball method, you would take the loan with the highest interest rate and pay the minimum, plus as much money as you could spare, and apply all of it towards the loan every month until it is paid off.

Learn how much you will need to put towards your student loans to pay them off early with an online student loan calculator.

Paying off any debt requires a strong mindset. When you're paying off tens of thousands of dollars in debt in a shortened amount of time, you will have to say goodbye to spontaneous restaurant dinners and random sessions of "retail therapy." Even if you aren’t as disciplined as you’d like to be, there’s help. While you may not qualify for complete or partial student loan forgiveness, There’s still a lot you can do.

One of the two websites that can help you on this journey is mint.com This is a fantastic website and app that helps you track your spending, keep tabs on your credit score, and makes budgeting very simple.

Another great website is Man Vs. Debt. The site was founded by Adam Baker. Adam and his wife were just the average American consumers who realized that they had a lot of stuff and even more debt, including student loans. When they sat down and talked, they realized that they wanted to live their lives and travel the world with no debt pushing them down.

They ended up paying off 100 percent of their debt, selling their house, and taking their infant daughter on a one year backpacking trip across Australia and New Zealand. After they came back to the United States, they started their website and along the way created an online community of people who are serious about tackling their debt issues once and for all.

You might be surprised to know that 1.2 million people in the United States over the age of 60 has student loan debt. This doesn't have to be your situation if you take the steps to get right financially and tackle your student loan debt every single month. Contact Debt Relief Attorney John Pytte at his Savannah office if you are ready to do something about your loan worries. Call us at (912) 417-3872 or click on Georgia Debt Relief to find out much more.